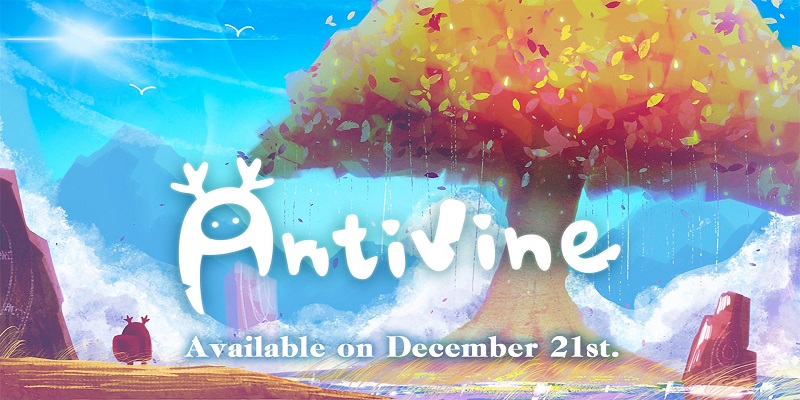 USERJOY Games announces Antivine has officially launched on 21December on Steam, which is a puzzle game developed by Regeneration Studio and supports five languages, including Traditional Chinese, Simplified Chinese, English, Japanese and Korean.

Antivine is originally designed by a group of students from Southern Taiwan University of Science and Technology. Their concept is to re-connect the relationship between people, and create unique experience based on games. Antivine has earned many domestic awards in Taiwan and the team has received sponsorship from USERJOY Games in 2021.

In its story, human beings have been fighting against the nature, and a negative power between these two keeps growing. There is one day, people start to have strange symptoms on their bodies – branches and vines grow from a certain age. After becoming a Treeman, the person will return to nature. Berries will grow from the branches and be provided to later generation. Senhsu is a unique boy from the village, and at his coming-of-age ceremony there is still no sign on his body. Thus, he has been crowded out by his people and started his journey for seeking the truth. He meets a lost girl Mumei on his way, and they move together for the challenges in front of them.

With this game, players can explore each island during the adventure, which is designed with different gimmicks and delightful background music. The design team also put in lots of work on its scenes, changes in the daytime and nighttime. Players must learn to change the way of thinking to solve the puzzle because there only a way to solve all these. And with its game settings, players can easily experience its story and immerse into the characters. Change the way of thinking, and follow Senhsu the boy to the adventure, players can finally reveal the truth of Treeman.

The development team wants to produce a game that touches its players, recalls the time when everybody is still little, looking at a crystal ball from angles, and leads them to think in different aspects.

Antivine  will be officially launched on Steam on 21December, and weeklong Christmas event will be happening! During the event, 21 December to 27December, purchase the game on Steam store and enter the serial number “christmas2022”, players will receive an exclusive Christmas Suit for Senhsu!