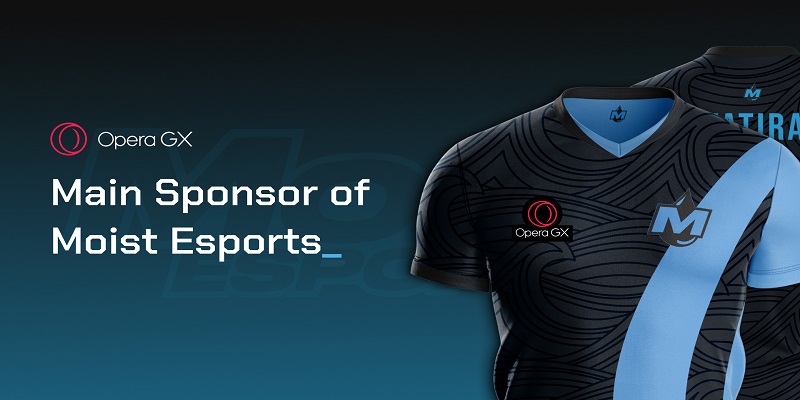 “Moist has been shaking up the status quo in gaming ever since he first arrived on the scene, with his disruptive style and attitude. And like Moist, Opera GX is proud to be the channel of choice for connecting millions of gamers straight into the content and people they really care about, which is why we’ve been working closely with Charlie for the last few years. And because of our shared philosophy, we’re proud to be taking our cooperation to the next level by sponsoring Moist Esports and extending our already successful partnership, which we believe has huge potential.” said Opera GX product director Maciej Kocemba.

Founded in 2021, Moist Esports has quickly become one of the most recognizable teams in esports, already securing several major tournament wins including the Rocket League Championship Series 2021–22 Spring Split Major, Super Smash Con: Fall Fest and MomoCon 2022. However, despite these major achievements, MoistCr1TiKaL, winner of best variety streamer at The Streamer Awards 2022, has spoken openly about the significant financial losses his team has endured, as part of its ongoing quest for glory.

With the launch of Moist Esports, Charlie has once again channeled his fresh energy and approach into transforming a new realm of gaming. Opera GX is fully aligned with the spirit and ethos of Moist Esports, and the sponsorship will not only help to directly fund the team’s continued achievements, but it will also enable the gaming browser to scale its existing partnership activities and create a deeper affiliation with MoistCr1TiKaL and the Moist Esports team.

For example, Moist Esports fans will be able download Opera GX and activate exclusive Moist Esports browser backgrounds, as well as accessing a calendar featuring all of the team’s events from within the browser. In addition, the Opera GX logo will continue to feature across the front of Moist Esports team jerseys, as well as being included on screen for all Moist Esports watch parties streamed on Twitch.

“Opera GX already has a long-standing relationship with MoistCr1TiKaL, so it makes total sense to take this to the next level and announce Opera GX as the lead sponsor of the Moist Esports team. Together I know we can smash it,” said Moist Esports Charles White.