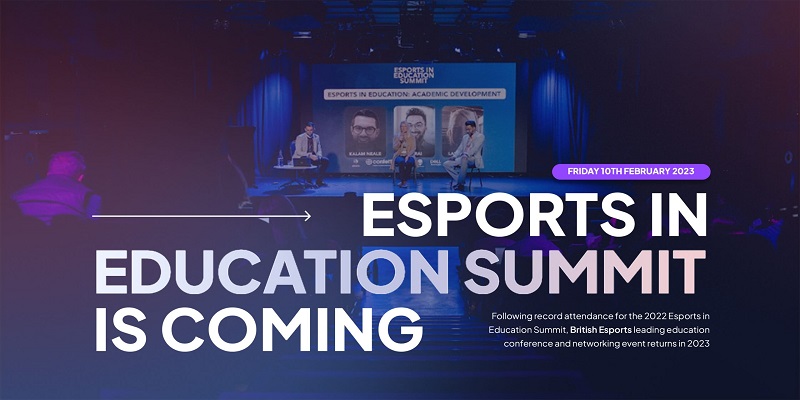 British Esports, the national body set up to support grassroots esports in the UK, has announced the return of its annual Esports in Education Summit on 10February 2023, with tickets now available for physical attendance with a 20per cent discount for a limited time. This will be a hybrid event with free online tickets being released soon.

Scheduled to take place earlier than its usual summer date in 2023, the event will be held on February 10th, 2023 and will take place at the Confetti Institute of Creative Technologies’ brand new £5m, 14,000 sq ft dedicated esports production complex in Nottingham.  Previously, the venue has hosted the Commonwealth Esports Championships Qualification and British Esports very own amateur grassroots esports tournament, the Student Champs.

The event is tailored to the education sector of the industry, and designed for Senior Leaders, Curriculum Managers, Lecturers and Educational Institutions, as well as those from amateur and professional esports organisations, to discuss the ongoing impact, developments and opportunities available in competitive gaming and esports for schools and colleges, especially those in varied stages of esports development.

This year’s Esports in Education Summit sees a few upgrades from previous years, including a Student Champs Showmatch, alongside a brand new networking event to accompany the traditional range of keynotes and panel discussions with industry leaders and experts from across the esports and education sectors.
The agenda for British Esports’ Esports in Education Summit 2023 includes;

In addition to this agenda, the Esports in Education Summit will also provide the opportunity for physical attendees to network with esports and education industry leaders, and tour Confetti X – the brand new purpose-built esports arena at the Confetti Institute of Creative Technologies.

“I’m really excited to welcome colleagues and peers from across esports education to the 2023 Esports in Education Summit.Whether new to esports education or a seasoned veteran, the Summit provides unrivalled industry insight and first hand exposure to the current state of esports and education in the UK. This is a great opportunity to network and connect with esports educators and other industry leaders,” said British Esports head of education Kalam Neale.

The confirmed line up of speakers for the fifth edition of the Esports in Education Summit will be announced in the coming weeks.