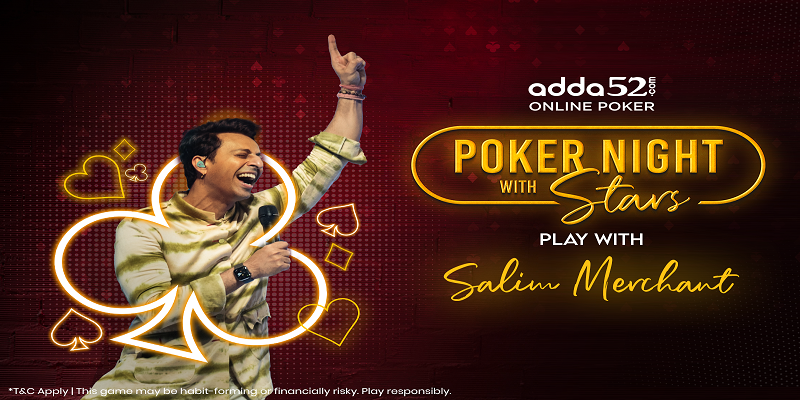 Adda52 has announced the fourth edition of its ‘Poker Nights with Stars’ series inviting poker enthusiasts across the country to come forward and get an experience of a lifetime. To grace the series, Adda52 has on-boarded the Indian Bollywood singer and music composer Salim Merchant, who will be playing against the seven shortlisted Adda52.com qualifiers.

Adda52.com came up with this thrilling concept of ‘Poker Nights with Stars’ to take poker to more and more people and amplify the craze around the game.  The players can participate in the contest via three routes – Cash leaderboards, tournaments, and a lucky draw for all first time depositors. The finale will take place virtually through zoom call on 18 December with the celebrity singer and music composer. The prize pool for the final table is rupees five lakh.

Speaking on the campaign, Adda52 chief revenue officer Krishnendu Guha said, “We are overwhelmed with the success and the participation we witnessed for the previous editions of ‘Poker Night with Stars’ series. The last edition featured popular Caribbean cricketer Kieron Pollard, which got the poker community excited and thrilled. Looking at the success, we are announcing the fourth edition of this series with the renowned Bollywood singer and music composer Salim Merchant. We are confident that this edition will witness an even larger participation. Adda52.com is committed to offer unique and entertaining experiences to its players, so that their passion for this skill-based sport gets a platform. Indian bollywood singer and music composer, Salim Merchant said, “I am extremely excited to join this fun and engaging series of ‘Poker Nights with Stars’ which has received an amazing response from poker players across India. A big thanks to the Adda52.com team for inviting me to be part of this entertaining series. Just like music unites people, poker too as a game has the power to bring together like-minded people and celebrate their passion for the game. Let’s get the magic of music and poker rolling together.”

‘Poker Night with Stars’ invites players from across the country to participate and relish the joy of playing poker with celebrated icons. The Poker Night with Stars series was started by Adda52.com in 2018 with Chris Gayle and now they are back again – bigger and better. The series offers both new and experienced poker players an equal chance to play online poker with celebrities and win exciting prizes.