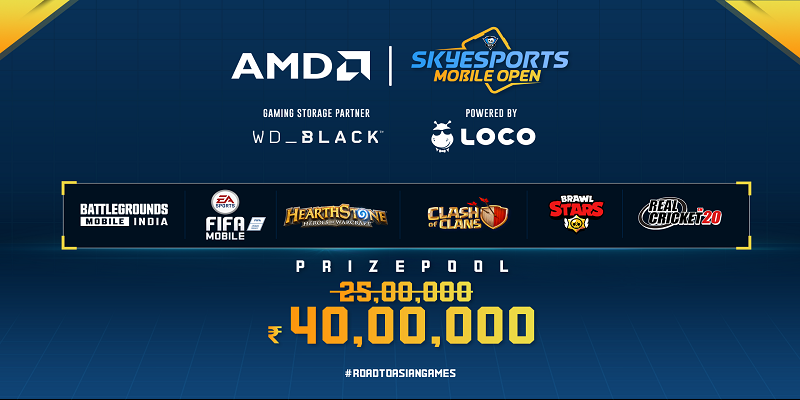 After the resounding success of the Skyesports Championship 3.0, the company is back with its next big tournament, the Skyesports Mobile Open. The competition will provide mobile gamers with a platform to hone their skills in BATTLEGROUNDS MOBILE INDIA, Hearthstone, Clash of Clans, Brawl Stars, Real Cricket 20, and FIFA Football, while competing for huge stakes. Initially announced to have a prize pool of Rs 2,500,000, this has now been increased to a humongous Rs 4,000,000.

The Skyesports Mobile Open is presented by Ryzen and powered by Loco. WD Black is the gaming storage partner. In line with Skyesports’ goal of growing esports from the grassroots level, the tournament features open-for-all qualifiers, giving every mobile gamer a shot at glory in the coming weeks.

Skyesports CEO Shiva Nandy said, “India has over 300 million mobile gamers and the market is growing at a very rapid rate. We are thrilled to launch this new IP especially for them. The Skyesports Mobile Open targets mobile gamers from every corner of the country, providing them a path to the Asian Games 2022, where esports has been included as a medal event for the first time. With open qualifiers, we are excited to see new stars emerge from the competition.”

Registrations for the titles (except BGMI) in the Skyesports Mobile Open will be opening soon. For BGMI, the top six teams from the Skyesports Skirmish Series and the best 14 teams of the Skyesports Championship 3.0 will qualify. Both of these competitions had open qualifiers, and the Skirmish Series had a format that ensured more regional penetration by splitting the country into different regions.

“It feels so good to see tournaments being organized for the Hearthstone India community. I am confident that this event will help create healthy competition among the Indian Hearthstone community and will help introduce Hearthstone to new players as well,” said Tirth Mehta, who won the Bronze medal for India in esports (Hearthstone) at the Asian Games 2018.

“Participating in national tournaments before going into the Asian Games will also help the competitive players hone their skills further and prepare them for the tough competition ahead. The players are preparing and practicing extensively for the Asian Games, and with tournaments like the Skyesports Mobile Open, we are getting that much closer to the gold medal at the Asian Games,” he added.

Loco founder Anirudh Pandita said, “Skyesports and Loco forged the way for the Indian esports scene with our partnership in 2020 and 2021 will now see an extravaganza like no other with the Skyesports Mobile Open. Loco has seen a 40x growth in watch hours since last year and these sort of events underline our commitment to building a robust Indian esports ecosystem.”