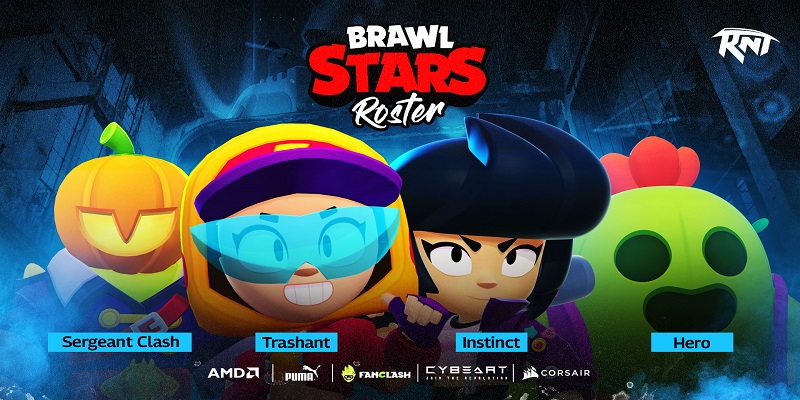 Revenant Esports have become the first Indian Esports organization to have a presence in eight different Esports titles as they mark their entry into Brawl Stars by announcing a talented and top-notch roster that will be leading the organisation’s title charge in upcoming tournaments.

Ashmit excels with the attacking potential of epic brawler ‘Stu’, Moida utilizes the high health and mobility of ‘Bibi’ to thrive and Prashant helps the squad with his quick speed as ‘Max’. Shaurya provides devastating damage output as ‘Spike’ to balance the team’s tactics and outperform the opponent perfectly.

“Revenant Esports has prominently focused on creating a sustainable ecosystem where multiple Esports titles can thrive and aid to the growth of the industry as a whole. Numerous organizations of the country are branching out to explore different gaming titles which will surely help the ecosystem to thrive and be dynamic instead of being too dependent on specific titles. Brawl Stars is one of the upcoming titles with a lot of promise and potential to become an influential title in the mobile-dominated era in India for the esports community. I am happy that as an outfit we are able to create a holistic team that is versatile and progressive and one of the most skilled rosters that is currently there in the industry. With multiple tournaments looming on the horizon, we are excited to see our teams in action and bring us success and glory,” said Revenant Esports founder and CEO Rohit Jagasia.

Prevailing as a duo in various tournaments, Ashmit and Moida have been playing together since last year and are considered the pros of this gaming title, recording six monthly wins together in the Brawl Stars Championship 2022 SESA-ANZ finals and being World Finalists at the Brawl Stars World Finals 2022. Prashant joined the team after his impressive performance in the 2022 Brawl Stars Championships monthly finals while Shaurya had competed in Game.tv tournaments with Ashmit in the past.

Expressing eagerness to be in action for Revenant Esports, team captain Ashmit Raj Singh said “It is a privilege for me and the boys to join one of the most reputed Esports organization in India. With our immense success in 2022, we are looking forward to continuing to scale newer heights for Revenant Esports and becoming one of the country’s top Brawl Stars teams. Personally, winning the most MVP awards last year in SESA and ANZ region was one of the highlights of my career and I hope to perform at a simar level here too. Playing with the same teammates is always a big plus point as we are already familiar with each other’s gameplay and have great synergy which will come in handy for upcoming tournaments.”

Having assembled one of the most competent rosters in Brawl Stars, Revenant Esports will now aim to replicate the success which they have achieved in Esports titles such as BGMI, Call of Duty: Mobile, Valorant, Pokemon UNITE, CS:GO, Apex Legends and Clash of Clans at the national and international stage.

The roster will be making their competitive debut in the upcoming ESL Snapdragon Pro Series India as well as the Brawl Stars Championship with their main aim is to qualify for the Masters in Japan.