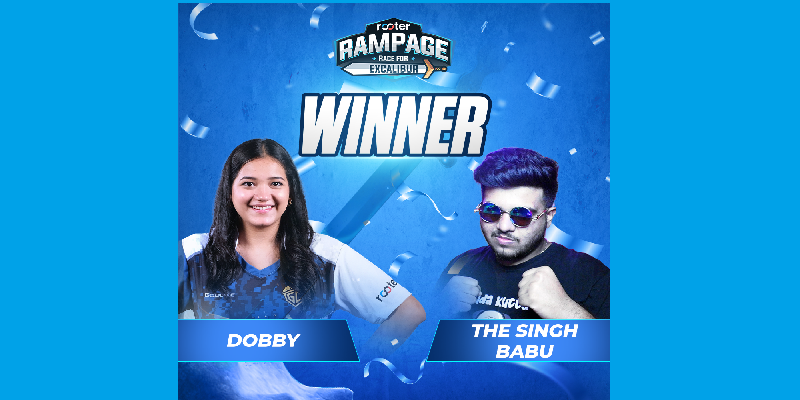 Rooter has just concluded an action-packed Rooter Rampage activity, the first in a series of initiatives that the company is launching to nurture the country’s high-potential game streaming influencers on its platform.

As part of this unique community mentorship activity, some of the top streamers on the platform were paired with a select cohort of upcoming ones, to help the latter strengthen their gaming profile. Over a series of live competitive tasks, each top streamer guided their creator partner in developing engaging content and practiced tips and tricks on delivering improved fan experiences. At the end of the seven-day campaign, Rooter streamer The Singh Babu was declared the winner along with his mentor, the popular creator Dobby, whom he now gets to meet in-person. He also takes home a hamper of Rooter goodies and a year’s subscription to Rooter Premium where he can get a sneak peek into all beta features being designed for streamers

With 15 million monthly active users (MAUs), Rooter has built one of the biggest game-streaming communities in the country, in just over two and a half years. More than 48 million Indians get their daily dose of entertainment on the platform, while a million+ creators produce entertaining content that is unique to their personas and can be monetized. Rooter has designed the mentorship program to help promising creators amplify their gameplay, emerge as better players and influencers, and create firm gamer profiles.

Rooter co-founder and COO Dipesh Aggarwal said, “We consider our one million and growing base of exclusive content creators our biggest asset, and we’ve always focused on creating an enabling ecosystem for them to grow. From industry-leading intuitive content creation tools to a dedicated community support team made of fellow gamers, to multiple revenue generation opportunities – we continue to invest in making us the platform of choice for every game streamer, creator, and gaming fan in the country. Rooter Rampage is a fun way for some of the most hardworking creators who stream on Rooter to learn how to grow to the next level of content creation.”

Under the quest to find the champion Kaun Banega Rooter ka Shooter?, five teams comprising a budding and popular creator each, competed over seven days through a host of contests where they were tested on format creativity (who can create the most amusing reel to get fan love) and streaming skills (attracting followers through interesting gameplay and community-engagement techniques). The mentors also spent time bonding with their team members over live stream sessions, sharing their gaming secrets and helping the latter improve their play techniques.