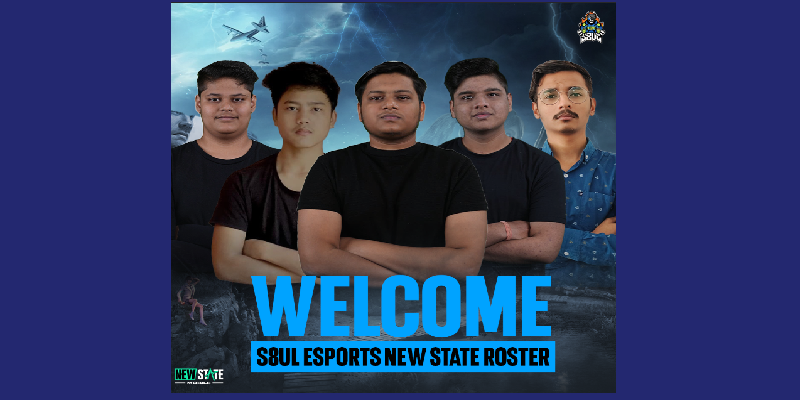 S8UL has announced its third esports lineup, this time for the increasingly popular gaming title, PUBG New State. With this news, S8UL enters Krafton’s second battle royale game and now has a presence in three of the industry’s top titles: Pokemon Unite, BGMI, and New State. As New State’s popularity in the country grows, S8UL has opted to groom the new lineup and compete nationally and internationally.

Expressing optimism about the lineup, S8UL co-owner “Lokesh Jain” aka “8Bit Goldy” said,“Announcing a line-up is a big commitment and it is after much thought that we have decided to take the plunge into New State. We have seen the boys play good games over the past few months, and we hope to add to their journey and provide them the right platform to grow as players. I am personally very excited about this one, and I expect this to be a successful venture, with the blessings of everyone. Indian esports is on the way to great things, and S8UL hopes to keep taking such steps as a positive addition to the ecosystem. We are committed to keeping esports around. As they say, the game must go on! New State, here we come!”

The team’s first tournament under the S8UL brand will be ESL’s SnapDragon pro series, with a prize pool of Rs 1 Crore.

The line-up was announced via S8UL’s social media accounts, with both the esports organisation and the players taking to social media to announce their new affiliation. S8UL 0pticGOD, the team’s leader, is looking forward to the next phase of their journey and says, “We have always been committed to playing well, and we couldn’t be happier to be playing under the S8UL banner. This is a turning point in our journey, and we are all overjoyed, appreciative, and ecstatic about this amazing new direction. Thank you Thug, Mortal, Goldy Bhai, and everyone else for welcoming us into the S8UL family. We look forward to accomplishing great things together!”

In the wake of the ban on Krafton’s other popular title, BGMI, this is excellent news for esports aficionados and fans. The top esports organisations in India are now releasing their New State lineup, and Indian esports is poised for explosive development across numerous gaming titles, further solidifying the industry’s existence and expansion.

S8UL is an Indian esports and gaming content organisation, and the only content group in India to be nominated for the prestigious Global esports awards. S8UL has won many BGMI tournaments, and the esports organisation enjoys unparalleled popularity in the gaming world. They anticipate continuing fan support and success on their new path.